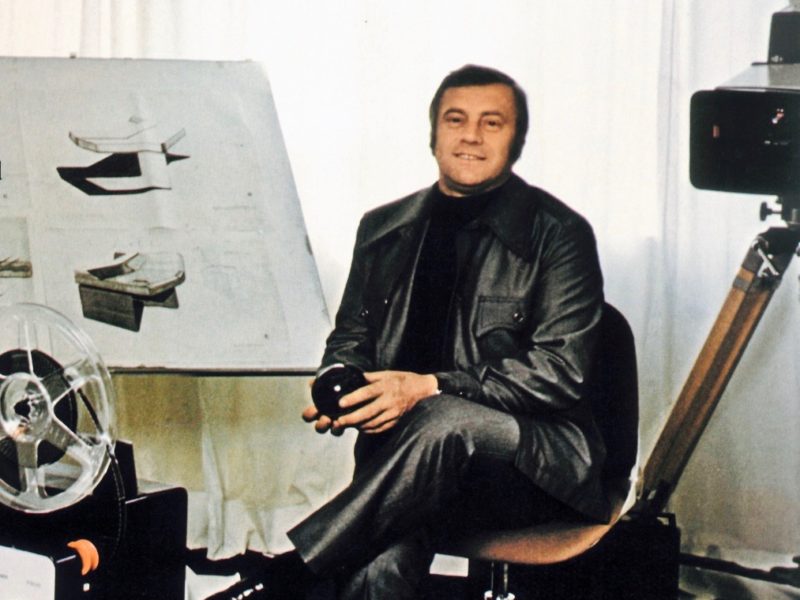 The Man for Soft Forms

“To satisfy prevailing tastes – today’s as well as tomorrow’s, that is,” this is how Hans Erich Slany sees his job as product designer. The graduate engineer from Esslingen (Germany), born in 1926, becomes self-employed in 1956. Until then employed as developer at the Metallwarenfabrik Ritter where he develops e.g. “the ergonomic boiler”, he then changes to Daimler-Benz and eventually, with orders from Ritter in the bag, he ventures a life as freelancer. Already back in 1958, he begins cooperating with Bosch, a car horn was Slany’s business card to introduce himself. And then in quick succession, one after the other, plastic dishes for children, an aircraft cockpit, Leitz upright file, Kärcher car wash equipment or Bosch drills. And he was also responsible for the design of many Bauer movie cameras and projectors.

As early as 1956 he collaborates on a photo camera. The first miniature camera made from synthetic material (Melamine) is designed for Zeiss Ikon and manufactured at the Görz plant in Berlin. At a very low price of DM 98.–, with rounded shapes and special coloring, these cameras were specially designed to attract women as potential buyers. “Here, at Heinz Löffelhardt, I had my first opportunity to get involved in camera design,” says Slany. From 1970 on, Slany works also on the design of the brawny Bosch TV cameras, then the world’s smallest color studio camera, of which more than 1,000 used to stand in studios and TV stations.

By the end of the sixties he starts working for Bauer, an offshoot of Bosch. Projectors are given a “softline form”. Slany: “Corners and edges are dropped making the equipment easier to handle. Every unnecessary decoration, like chrome strips, is omitted. This was the beginning of the clean softline form. Movie cameras are also given very soft, easy to handle and functional forms.”

Slany and his team join Bauer. In 1977, Bosch places double page ads featuring 43 of its products that received awards from the Stuttgart Design Center. Of these, 26 came from “Slany Design”.

The fancy A 512 too, developed under engineering code name “alpha R 10”, is a horse from Slany’s stables. In this case, however, the designers were unable to proceed as they would have liked. “The difficulty for us was that there were a lot of parts from existing cameras which, for cost and time reasons, had to be used. All we could design new were the side covers, the top control panel and the surfaces of the handle and the lens – and the color of the camera. The style of all Bauer cameras manufactured at that time was adapted to match this one,” remembers Slany.

With the advent of bulky autofocus units, Slany proposes to integrate this element tastefully into the body of the “Bauer AF 2000” camera and not to attach it like a growth above the optics as Bell & Howell, Chinon or Elmo did. But the slim brown compact camera remains on the drawing board, because every effort is now devoted to the big “S 715 XL microcomputer”. “This sophisticated sound camera was the last significant camera developed by Bauer” according to Slany.

Yet the man remains agile. 1983 he is appointed the Honorary Professor at the faculty of design of the Berlin College of Arts (Berliner Hochschule für Künste). Three years later he establishes a course for the “Design of Capital Goods” at the Stuttgart Academy of Fine Arts (Stuttgarter Akademie der bildenden Künste). There he holds the chair as full professor until 1992. His company, Slany Design GmbH, of which two of his long-time colleagues are also shareholders since 1987, receives more than 900 awards.

Looking back at the era of narrow-gauge movie film, Slany is amused by the repeated attempts to get women behind the camera by constantly featuring them in advertisements. “That’s advertising targeted at women – created by men, with men’s way of thinking,” Slany smiles at this and he is not surprised that all these attempts to win women over to movie-making usually failed. Making amateur movies still appears to be mainly a man’s thing…

Hans-Erich Slany, who was born in Böhmisch Wiesenthal, Czechoslovakia, in 1926, died in Esslingen (Germany) in September 2013. He is bearer of the Cross of Merit on Ribbon of the Order of Merit of the Federal Republic of Germany.