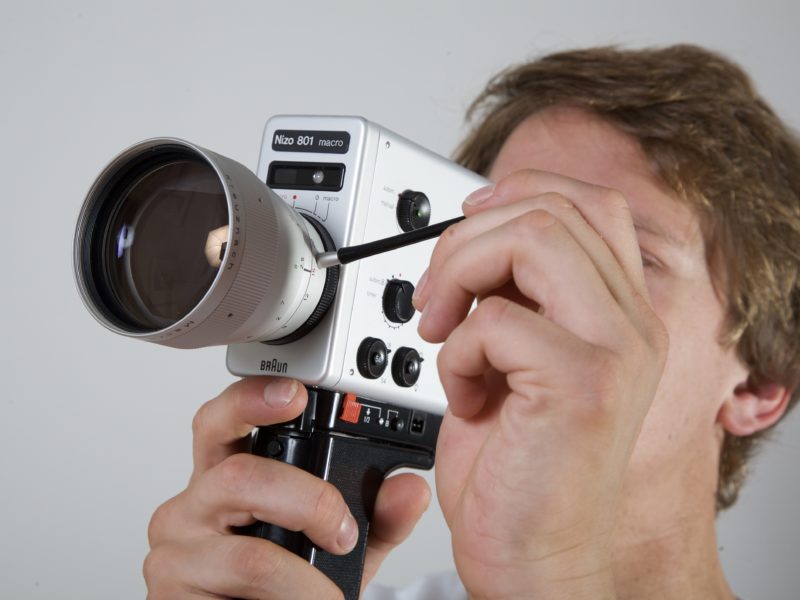 Everyone has to start somewhere. That’s why we made these tips. The basics of small format filmmaking, Super 8×8. 64 tips, 8 workshops, 8 tips in each episode. Today we’re going to be selecting your first Super 8 movie camera. And how to tell if it’s any good.

Super 8 is not video. You can’t delete movie. Once exposed, the 3,600 images per cartridge are chemically bound to the perforated strip for eternity. You should not pull the film out of its cassette before or after exposure. Well, you can do that, but then it’s ruined… Film must remain in the dark until it has been developed. You can only capture 3 minutes and 20 seconds on a cartridge when the movie camera is running at 18 frames per second. If you shoot at the “professional speed” of 24 frames per second, you have to be content with two minutes and 30 seconds. And for that you have to pay around 85 US-$/Euro, including development and scan. So it’s good to think carefully beforehand about what you want to shoot and how. By the way: Super 8 films are only available in this length. You can’t get more into the cartridge: 15 meters! And there is only silent film, since 1997 there are no sound cartridges any more.

I’m sure you already know that or you wouldn’t be reading this text. But I like to say it anyway, just for the record: great colors, every single frame is painted by the film grain, slightly dancing scences, beguiling look. That’s the way it is with Super 8, color or black and white. Ideal for many projects: for music clips, commercials, skater movies, cartoons or short films with a plot. Experimental projects are also possible on Super 8, or combinations of digital video material, undercut with scenes on Super 8.

Is this any good?

Where does the camera come from? From eBay – for 20 US-Dollars/euros? I don’t see why not! You can’t go wrong. But what you have to pay attention to: The seller must confirm in the offer that he has tried the movie camera without film, that it runs at all speeds and that the motor zoom works. If he can’t guarantee that, he writes that he has no idea how to set the thing in motion, but the last time (XXX years ago) the camera was still running at grandpa’s – hands off! There are dozens of Super 8 cameras waiting for you, try next auction. Or go to the flea market, there you can try it out. It’s best to have six 1.5 volt AA batteries in your pocket! Some camera stores, junk shops or photo exchanges offer used Super 8 cameras. And of course www.clickundsurr.de – the analogue photo and film shop in Berlin, also online, sells movie cameras with warranty, which were previously made chic in the workshop.

Do not film right away!

Test each camera first. You get angry if you shoot something important and it doesn’t turn out right. Super 8 cameras are at least 40 years old sweethearts, they can purr and whirr for a long time, but they can also be long gone. After a dry check with batteries, be sure to insert the desired film and make a test exposure. How? We’ll explain later…

When you get old…

…you get weird sometimes. Battery contacts corrode, fungus or dirt collects in the lens and the glass becomes milky cloudy. You can see that right away – and you should avoid such devices. You can also test the light meter. Turn the main switch on, put your hand in front of the lens, point the lens at a bright environment, look through the viewfinder, remove your hand. Does the displayed aperture value change now? Or does a red indicator go out, does a green one appear instead? Then everything is fine.

What you can’t tell by looking at this thing…

What comes next cannot be checked before the purchase. Only a test exposure will show if the light meter is really ok and/or if the code recognition in the film compartment of the camera harmonizes with the sensitivity notch on the cartridge. Thus: buy standard film (e.g. Kodak Tri-X black and white or Kodak Vision3 50D color negative), make a test exposure with automatic exposure, then underexpose and overexpose one aperture in steps of 1/3 aperture. Mark scenes accordingly in the picture! Simply hold a piece of paper with an inscription in front of the lens. After development, check if the camera does everything right in normal position. Or if you have to overexpose or underexpose an aperture to get the look you want. If the deviations are too big, the pictures all too light or too dark, the camera has to be repaired – or a new old one has to be bought.

Some movie cameras, for example many models of Nizo or Elmo, need one or two light meter batteries in addition to the two to six AA motor batteries (1,5V each). These are located in a special compartment. Instead of the formerly common 1.35V batteries PX625 or PX675, which are no longer available today, 1.5V batteries can be used. The changed voltage and the thereby slightly changed exposure metering swallow negative and black and white films without any problems.

To make it sharp

Before holding a piece of paper with aperture values in front of the lens or before taking any test shots that make the camera rattle, first adjust the viewfinder image to your own eye. Put the zoom in the final tele position, take a tape measure and determine a distance of two meters from the film plane. There you put a note with some hand written notice. Now set the focus ring on the lens to two meters at the mark. Directly at the viewfinder you will find the diopter compensation, where you now crank back and forth until the viewfinder image of the written notice is sharp for your eye.

In the next workshop Super 8×8 we will help you to find the right camera model. Which one can do what?

If you can’t wait and want to read all the tips on filming with Super 8 right away, you can pick up this book: https://www.super8shop.de/en/produkt/schmalfilm/buecher_sf/super-8-von-juergen-lossau/ 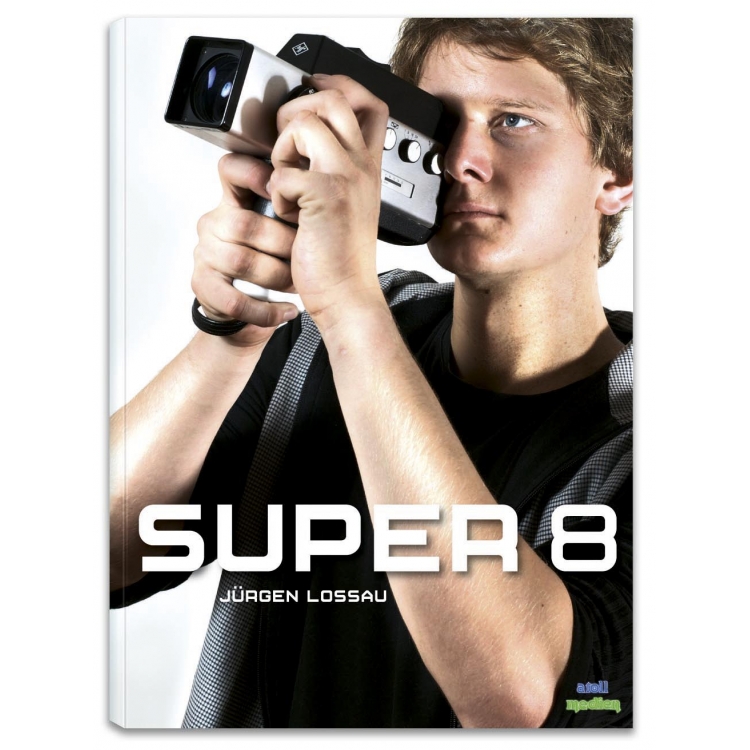