A short about Las Vegas

BLINK OF NEON EYES – that’s the title of Patrick Müller’s short film, for which music was composed especially. And even recorded live – at the film premiere in a cinema. In our interview, Patrick Müller explains how this Super 8 film was made in the USA.

Patrick, how did this surreal night full of neon lights come about in March 2019 in Las Vegas?

Patrick Müller: I was on a road trip across the USA and had stopped there. For years I’ve had images of neon signs from old newsreels in my head, but also of old films noirs. Most of the time you only see the illuminated advertising there, but everything around it stays black. I like these colorful, lurid temptations that light up the nightly darkness. If you want to film something like that, Las Vegas is perfect, because you can find all kinds of old and new neon signs. There is even a museum with discarded illuminated advertising!

In the whole city it is larger than life and thanks to modern LED technology it is now able to show videos, but this is seldom used really skilfully. This night was surreal because the place alone is unusual. A city in the desert, which only serves the game pleasure. In which there are no benches, because you should only sit at the slot machine. Where dogs do their business on plastic lawns and Roman columns are equipped with USB charging technology.

Did you start filming and think about a concept later?

The title and concept were already decided before shooting started. So I knew that the neon blinking should consist of many small sequences. They should capture the oppressive but fascinating atmosphere – full of contrasts. It was 38 degrees outside! The air is incredibly dry and the reconstructed Canal Grande emits a fine, disturbing smell of chlorine. Therefore I filmed many details and movements, but also hearts, signs and cars, which drive with their red brake lights along the pulsating lifelines of the city. There are even messages in text form that report on the death of a player unknown to me.

“I used the small and light Minolta XL-401 with a f 1.2 lens that is surprisingly fast, sharp and the camera is nice and inconspicuous.”

Which film and which camera did you use?

I used two cartridges of the new Ektachrome 100D, which I had bought in Berlin at click & surr before the trip – for safety reasons. I was unsure if I could buy any in the USA. And that was a good thing, because on the whole trip I only found them in San Francisco and New York. The camera I used was the small and light Minolta XL-401 with a f 1.2 lens that is surprisingly fast, sharp and the camera is nice and inconspicuous.

You had the development and scanning done in the USA. What are your experiences with it?

Since I was afraid that the numerous airport scans would spoil the film for me and I was passing by the Moby Dick city of New Bedford anyway, I rang the bell at the CineLab right away. They gave me a warm welcome and even offered me a guided tour of the facility. So I could see where my film is developed and scanned. A Xenia scanner was used, which digitized the material in 4K resolution. This was astonishingly fast, already shortly after my return to Germany two weeks later I could comfortably download the ProRes file from the Internet.

You always strive for the highest possible quality in narrow film format. This is already evident from the fact that you usually like to work with the rare and very elaborate Logmar Super-8 camera. Are you satisfied with the results of camera, film, lab and scan on your neon project?

Yes, everything was exactly as I had imagined it would be. At first I had thought about taking the Logmar with me, but size and weight are decisive factors when travelling for several months.

“The musician Uwe Rottluff from Chemnitz provided music for numerous films of mine.”

In November 2019 you were able to show your film in Braunschweig (German city in Lower Saxony) at the International Film Festival. There was a world premiere, namely a live performance with the music project Wellenvorm. How did it come about?

The musician Uwe Rottluff from Chemnitz is behind the project Wellenvorm. It wasn’t completely new, in 2015 he had already provided music for numerous films of mine. But for BLINK OF NEON EYES and THE GARDEN, which I also shot in the USA, he wrote new music especially for it, which I’m very happy about. In Braunschweig this was something very unique: Uwe with his musical instruments was downstairs on stage, I played the 16mm films synchronously with a Hokushin projector upstairs.

How were the reactions in Braunschweig?

Very positive. For many who had not yet experienced a real film projection, it was like magic. The young sound engineer said: “That looks so beautiful!” There were so many questions afterwards that the Q&A took 30 minutes.

Now the film has the live performance. Was there a different soundtrack before?

No, the film was finished at the last minute. Uwe Rottluff improvised on his modular synthesizer, a big box with countless buttons. I was extremely excited before and then overjoyed at how the result turned out. He captured the stifling, pulsating atmosphere of the big city well.

Can the film also be seen at other festivals?

It was supposed to be shown at the Dresdner Schmalfilmtage, but understandably the festival was postponed due to the Corona pandemic. Let’s see if there are alternatives. It also ran at the Twin Rivers Festival in the USA, which streamed it live because of Corona. In August the Vegas Cinefest in Las Vegas will also show it.

Apparently the film doesn’t only exist digitally, if you showed it as a 16mm copy in Braunschweig?

In addition to a digital DCP, I also had a 16mm projection copy of the Digital Intermediate pulled for analog film festivals, which really shows the film to its best advantage. There is no Super 8 copy ready for presentation.

Will there perhaps be another collaboration with Wellenvorm?

For sure! I wanted to shoot a horror film about northern lights in March based on a literary model in Sweden, but the trip was cancelled due to the pandemic. But I won’t let up and will try again next year.

What are your film plans for this year?

Because of the curfew it’s hard to estimate. But once it is over, I am confident that the ideas will come naturally. There’s enough time for inspiration these days… 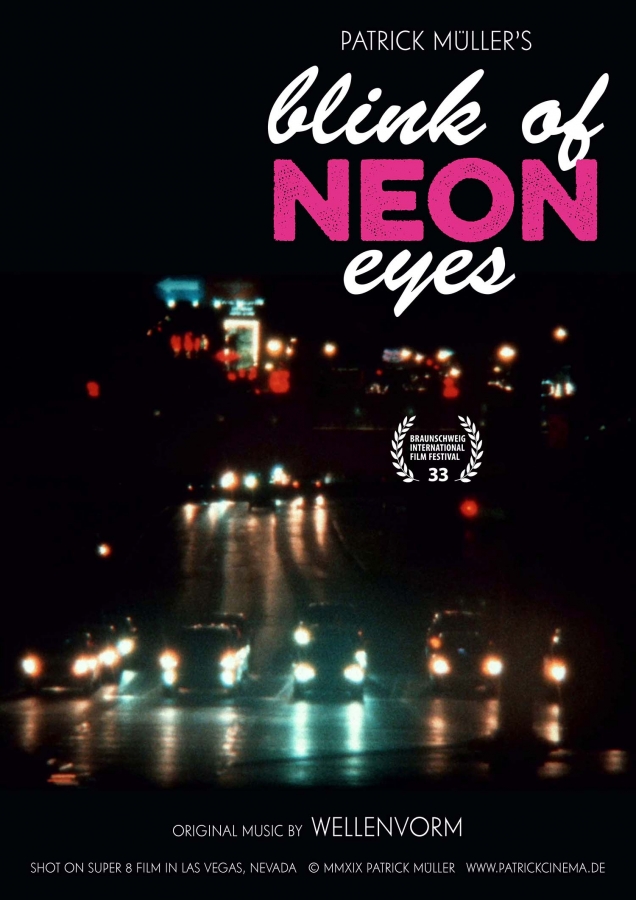