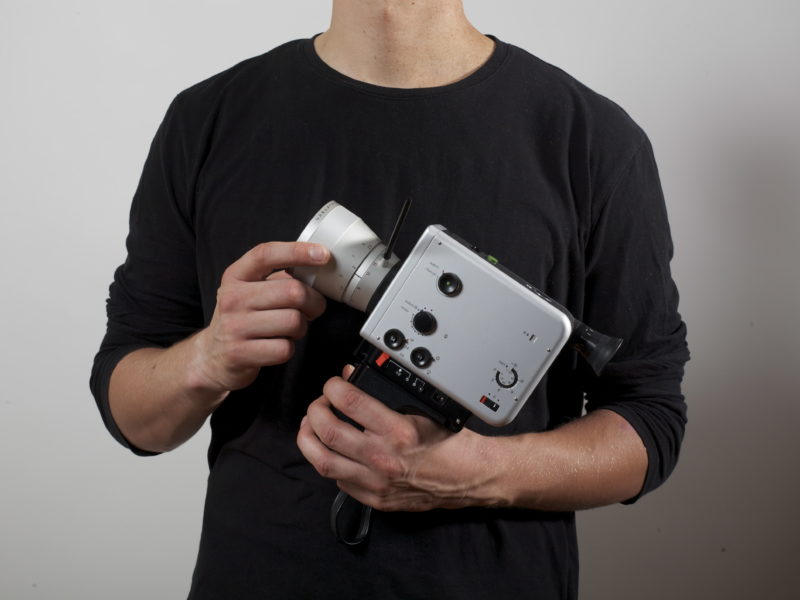 In the second part of the Super 8×8 workshop, we will give you tips on cameras that you should buy and those that you should keep your hands off. Remember: every piece is over 40 years old! Not every model still plays along today and for some, technology has fallen by the wayside. But first we will introduce you to the good pieces in five categories, then the less attractive ones in three categories.

Ideal for beginners: Compact Super 8 cameras are great for attaching to skateboards, skis or bicycles. In the compact class we have listed handy cameras that either have no handle at all or have a folding handle. All of them have a 3 to 6x zoom, exposure measurement through the lens (TTL = through the lens) and work with 18 frames per second. This would fulfil the most important functions. Now you have to see what else you expect from the camera:

Here are some models:

XL stands for existing light. These cameras are supposed to prove their worth especially in unfavorable lighting conditions. This is due to two factors: particularly light-intensive lenses with apertures of 1:1.0 to 1:1.4 (instead of the usual 1:1.7 or 1.8) and an enlarged bright sector of the rotating shutter (up to 230° instead of 160 -180°). This extends the exposure time to about 1/30 sec., which can lead to slight motion blur with fast subjects. In combination with highly sensitive films (e.g. Kodak Vision3 200T and 500T) interesting results can also be achieved in the evening. If it gets too dark, however, it is difficult to look into the viewfinder. In contrast to brightly lit LCD displays, most Super 8 cameras divert some of the light entering the lens and direct it into the viewfinder. When it’s dark outside, nearly nothing gets into the viewfinder.

What else can you expect from XL cameras:

Here are some models:

On dive station with Super 8

Those who want to go into the water with a Super 8 have the easy choice: there is only the Eumig Nautica. This camera can go with you to the diving station without an additional housing, but it also shoots wonderful pictures above water – for example in the rain. If you want to buy it, make sure that the screws are not yet rusted and that the sealing rings are in good condition. For the door seal you need special grease. Very important: After use in salt water, always rinse thoroughly with fresh water and dry off. Leave the camera door open for a long time so that no condensation water remains in the device.

What else can you expect from the Eumig Nautica:

The Nautica is available for 200 to 400 Euro. Special underwater housings were produced for two other camera systems: the Bauer Aquarius for the Bauer C cameras and the identically constructed Silma Sub Nautilus for the Silma 4S/6S/8S. These housings are quite rare, but usually available at a reasonable price. For snorkeling, there used to be plastic bags from Ewa Marine, which dived with many models. Whether the plastic parts remain tight today is rather unlikely.

Top-of-the-range cameras have an 8 to 12x macro zoom, which is permanently mounted and can often be motorized at two speeds. There is no interchangeable lens on these devices. This feature is reserved for system cameras, which we will take care of in a moment. Moreover, top cameras have all kinds of gadgets on board:

The special favourites of Super 8 friends are the following cameras, which are more than happy to go over the virtual counter for 250 to 500 US-$ or Euros:

These models have a decisive advantage: You can change the lens. All listed Beaulieu cameras have a C-mount connection. This means that the interchangeable lenses of 16 mm cameras can also be used. The Leicina Special has a Leica M bayonet. In addition to the standard 1:1.8/6-66 mm lens, a macro cinegon with 10 mm is available for this Super 8, which also allows close-ups. Also the entire range of Leica-M photo lenses is available. The focal length of the photo lenses must of course be calculated on the Super 8 image. This is done with a factor of 6, which means that a standard 50 mm photo lens corresponds to a 300 mm telephoto lens on a movie camera. This is the 30x magnification of the Super-8 standard focal length of 10 mm. With extreme telephoto focal lengths you can look into moon craters – but all from a tripod.

But the system movie cameras named here have another common advantage: they all have a control dial to manually adjust the ISO speed of the film stock! There is no mistake about detecting any cartridge notches. Extremely recommendable, forever prepared for everything, but up to 1.000 Euro expensive!

Do not take a fat one

Super 8 cameras were initially designed as silent movie cameras in 1964. From 1974 onwards, sound movie cameras were added. They had a sound head and pressure rollers, used larger cartridges and brought more weight to the scales. Sound film cartridges have not been produced since 1997. Anyone who reaches for a sound camera today is carrying around an unnecessary amount of ballast – and struggling with a clumsy camera that has far too many pointless buttons. Take a light, small silent movie camera, they were built parallel to sound movie cameras. Exceptions confirm this rule – more about this later!

When Super 8 was the common amateur medium, the first autofocus units appeared. They worked with two mirrors or with ultrasound. In the beginning, both were susceptible to interference and slow. In addition, the thick bollards at the front of the lens were very bulky. Today nobody can do anything with it anymore. If you want Super 8, you have to focus yourself.

Some Super 8 cameras have a 10x or 12x zoom. People used to love that. Lens killers meant expensive cameras, magnificent objects of prestige. But they are also big, heavy pistons, which do not always make the film experience easy. So think before you start: Do you need such a caliber? Do you always shoot on a tripod for long focal lengths? If you want to shoot from the hand, a 6x zoom is already too much for you. Because remember: there is no image stabilization here. And with shorter focal lengths it is easier to shoot sharp pictures because the depth of field is greater.

In the next workshop Super 8×8 we will introduce Super 8 films: Black and white, color negative and color reversal. Five types to choose from – with sample films included.