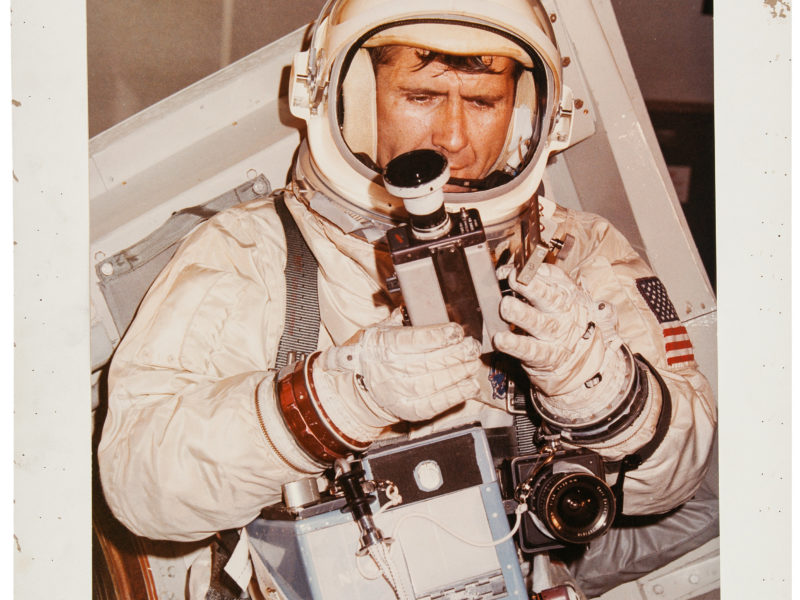 See here an early prototype of the legendary “DAC” as carried on Gemini and both the Lunar Module and Command Module of all the Apollo lunar missions. All of the movie footage made of the lunar missions and many of the stills (including the ones of Neil Armstrong on the moon) were made with a Maurer 16mm of which this is a prototype.

This is the type of camera that was mounted at the window next to the Lunar Module Pilot on the lunar landings. During Apollo 11, the Maurer DAC recorded the descent to the lunar surface for landing, Armstrong’s descent down the ladder, and eighty-six minutes of the lunar EVA. These 16mm color cameras used film magazines that held about 130 feet of color film which, at the standard 24 fps would have only provided three+ minutes. Because they allowed frame rates as low as 1 fps which is what was used for the moonwalk footage, the time could be extended tremendously. After Apollo 11, the DACs were taken outside of the LM: on Apollo 12 one was mounted on the Lunar Hand Tool Carrier; Apollo 14 had one mounted on the Modularized Equipment Transport cart; on Apollos 15-17, they were mounted on the Lunar Rover. Another of these was also always mounted in the Command Module to take movies of docking procedures, etc.

The Data Acquisition Camera is a modified movie camera and is an improved version of the earlier Gemini-type 16mm sequence camera equipped with new-type external film magazines which greatly enhance the photographic capabilities.  Primary use of the camera is to obtain sequential photographic data during manned flights.  It is used for documentary photography of crew activity within the CM and for recording scenes exterior to the spacecraft.  Bracketry installations at each rendezvous window facilitate use of the camera for CSM-LM docking photography to recording engineering data.  Camera modes of operation (frame rates) are variable as follows: time, 1 frame per second (fps), 6 fps, 12 fps, and 24 fps.  Shutter speeds are independent of frame rate and include 1/60 second, 1/125 second, 1/250 second, 1/500 second and 1/1000 second.  Camera power is obtained from the spacecraft electrical system via panel-mounted 28-vdc utility receptacles.  Camera operation is manually controlled by an 0n-Off switch located on the front of the camera. Camera weight, less film magazine, is 1.8 pounds (0.8 kg).  When mounted at either spacecraft rendezvous window, the camera line of sight is parallel (+2 degrees) to the CM  X-axis.