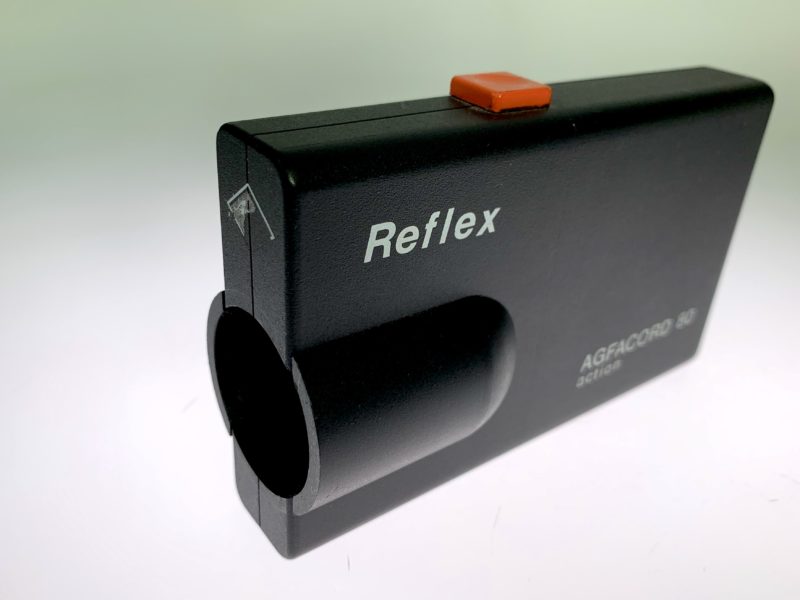 The little one from the closet

When Agfa shrunk the cartridge

It doesn’t have a lens yet. It doesn’t have a viewfinder either. But it already has a name: Agfacord 80. Between 1975 and 1979 the film manufacturer from Leverkusen (Germany) wanted to create a completely new movie camera. The only way to do this, Agfa was certain, was to move the Super 8 film into a smaller cartridge. The prototypes for the camera and the film cassette still exist. They were a potential challenge to Kodak.

1980 – the market for small format movie cameras collapses rapidly worldwide. Agfa introduces a new concept: the round Family. A movie camera with only two buttons. One for filming, one for Super 8 stills that are stopped for a few seconds in the screen projector. Even instant images can be made from them in the projector. The spherical plastic box is a desperate attempt to fuel the ailing market with a new type of family camera. In vain.

Even before that, an Agfa technical team at the Camerawerk in Munich is tinkering with another idea. It is to be a very small camera, an action cam reminiscent of the legendary Agfa Microflex. Virtually designed into the hand. Only in a contemporary design. And even smaller than the old Agfa’s with the sensor shutter release.

The design of the model, which bears the name Agfacord 80, originates from the usual suspects: Schlagheck Schulte’s design, based in the Munich area. This company is responsible for the appearance of almost all Agfa-branded photo and film equipment. A former employee of the design forge recalls: “It was an attempt to stand up to the emerging but clunky video machines with a high-quality, super-small movie camera”. The hand-held flatterer has only one button: the shutter release, on top of the camera, which does not require a handle. Unlike the early 1970s, when the sensor shutter releases were round, the new one is square. What remains is the colour orange.

But the movie camera with the bulky Super 8 cartridge that Kodak launched in 1964 cannot be really small. So the engineers thought about the unthinkable – a smaller cartridge. And indeed, the prototypes on hand are a third smaller, both in height and width. If you place them next to the Agfacord 80 camera model, you notice that the camera would have to be an inch thicker to accommodate the modified cassette. But still, a start was made. This is only possible because Agfa wants to fill the small box with film on polyester layer. In the prototype, this material is already inside, 15 meters, just as long as its big brother Kodak. Up to now, Agfa had, as it is also usual for Kodak, produced acetate-based films that are approximately one third thicker than polyester material.

In a second draft Agfa tries its hand at an endless cartridge. It rewinds the film it has just exposed on the same reel from which the film originally came. This saves space on the back of the cassette – for the equipment that has to be accommodated inside the camera. An attempt to keep the width of the camera small.

Agfa had failed with a polyester-based film at the beginning of the Super 8 era. Around 1965, the Leverkusen-based company tried the Single-8 cartridge of rival Fuji Film. The Japanese brand filled 15 meters of polyester film into their small plastic boxes. Agfa tried with thicker acetate film, but only a measly ten meters fitted into the competitor’s cassettes. For a short time, the Agfa Single-8 cartridge remained on the market, then the German company switched completely to Kodak’s Super-8 cartridge, which had been successfully introduced worldwide – and could stay with the acetate layer. Ten years later, Agfa probably is able to produce on a polyester basis. And thus to throw a competitor cartridge to Kodak onto the market.

Industrial designer Julian Schlagheck, son of the company co-founder, discovers another design for Agfa on two slides. The current managing director of the company renamed Schlagheck Design knows that his father Norbert was responsible for almost all of Agfa’s narrow gauge film designs. One of them is a Super 8 cartridge called Moviesette mini, for which there is an adapter that has the dimensions of the normal cartridge developed by Kodak. In a size comparison between the two plastic boxes, the volume saved can be easily estimated. “Unfortunately, it’s difficult to determine the exact time of design,” says Julian Schlagheck.

And the Munich-based designer can also come up with a slide of two other Super 8 camera designs, apparently designed as successors to the Microflex series. It shows the Agfa Moviematic C200 and C300, slim cameras, presumably also made for smaller Super 8 boxes. Both models have two buttons, probably intended either for single frames or continuous shooting at 18 frames per second – similar to the Family concept. “The round shapes suggest a period in the late 1970s,” says Schlagheck.

The devices are never built in series. Agfa abandons courage after 1980. The Family is a flop. All the other brands of movie cameras also had horrendous slumps. The Super 8 camera market is saturated. So Agfacord, Moviematic and Moviesette remain a pretty idea without realization. “At some point,” recalls the former employee from the design office, “the Agfa people picked up all the Super 8 designs from us and buried the plans”. Only the Agfacord 80, which had probably been forgotten. Years later, the design, together with mini-cartridges, was discovered in a cupboard in the design office.