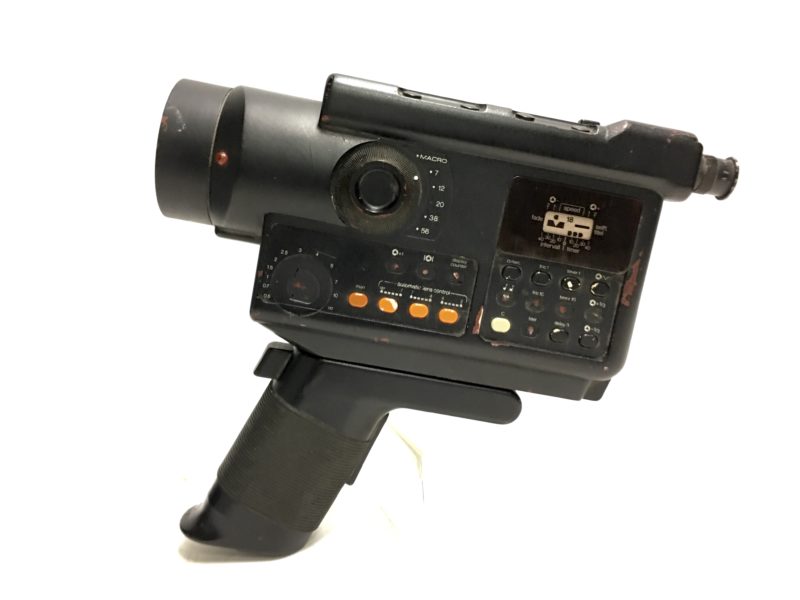 Planning of a Stillbirth

It wanted so much to see the light of day. At least I think it did. And it would have just as soon recorded the sounds of the day. But it never came to that. The design of the microprocessor model 4108 was nearly completed at Bolex in February 1980. The resulting 5XL, 8XL and 11XL sound movie cameras were actually ready for the market. Actually.

It is rare to trace the development of a movie camera series meticulously on the basis of documents. Here it succeeds. Based on a project description, which chief designer Peter Vockenhuber last added on February 8, 1980, it is possible to reconstruct down to the last detail how the Bolex prototypes with the number 4108 were created. And they really did have a few details on board that had never been seen on Super 8 cameras before.

After the production of Bolex’s own Super 8 movie cameras came to a standstill around 1973, a label fraud soon set in: The Bolex logo was on the camerea – Chinon from Japan was inside. This applied to both silent and sound movie cameras. As early as 1970, the Swiss brand lost its independence and was swallowed by Eumig in Austria. With the development of the sophisticated PMA wide-angle silent movie cameras, the Austrians finally dared to produce sound movie cameras themselves. Eumig had previously left this to Bell & Howell in Japan and sold the equipment under the Eumig brand name. The developments of the Eumig PMA cameras, as well as the world’s only Super 8 underwater camera Nautica, came from Bolex’s study department in Yverdon, which had been taken over by Eumig. It was there that the instruction was finally given to design a Super-8 sound movie camera series under the name Bolex Pro. On 13 January 1978, as it says on the paper of the project description, the order was given. The story begins.

The model series consisted of three sound movie cameras, which differed mainly in the lens:

All models have two zoom speeds. A motor selects three focus zones at the touch of a button: 7 meters to infinity, 4 to 7 meters or 2 to 4 meters. This method was probably the answer to the autofocus systems that were not so convincingly working at the time. In order to ensure sharpness in the automatic mode (that could be switched off), there were maximum focal lengths that were pre-adjusted depending on the measured aperture. At aperture 2 nothing went beyond 15mm, at aperture 11 it was 50mm.

The cameras should be able to read films up to ISO 400. Silent and sound film cartridges could be used, even 60m sound cartridges fitted in. The available frame rates in mute mode were 1, 9, 18, 24 and a “fast speed”, which was not described in detail. For sound recordings 18 and 24B/sec were intended. A small peculiarity in passing: The “normal gear”, i.e. 18 or 24, could only be preselected by means of a coin on the bottom of the camera. A “vario-timer” enabled one frame per second up to one frame every 255 seconds.

The viewfinder was an extremely special new development from the Bolex study department. Around the actual image there was a so-called environment viewfinder with liquid crystal display. It was used to indicate the focus zone, sound operation, overexposure or underexposure, film supply and transport problems. A split image for manual focusing was also provided. The complex viewfinder turned out to be a right battery swallower. On Peter Vockenhuber’s project description there is the handwritten remark: “Camera can only be demonstrated with batteries, otherwise the viewfinder is two apertures darker!

The design 4108 also had a special LCD display outside. If the flap above the display was half open, the operating status was displayed. When fully open, all operating modes could then be preselected – including a self-timer after 3, 6 or 9 seconds of advance. Fade-in and fade-out should be possible, also crossfades of picture and sound. An idiosyncratic gimmick was the intended “sharpness fading”. Here the camera automatically moves the lens into macro mode at the end of a scene and back again at the beginning of the next scene.

While the 5XL model was only supposed to have automatic sound control, the two luxury models had manual control via potentiometer and two LED displays: green for normal level, red for overdrive. Brand new was a 13-pin connector strip that made it possible to control the camera from the outside, even via a computer. Other ideas were to operate several cameras, an “intelligent tape recorder” or bank surveillance with single images.

On 2 April 1979, the people at Eumig pulled out their pencils and calculated the presumed wage and material costs for the 8XL model, predicted for 1981. They came up with 3,020 Austrian schillings, that was 430 German marks. The sales price of the factory could then be 4,020 schillings, so it was thought; there was not much profit, because the high development costs were not even included. The maximum achievable selling price in Germany was 1,100 D-Mark. Also for the other models “optimal going prices” were determined in the Federal Republic of Germany in November 1979: DM 1,300 for the top model, DM 900 for the small 5XL. The 11XL was expected to be sold up to 12,000 times a year worldwide, the 8XL and the 5XL each one up to 24,000 times a year for three years.

A plan and a staircase

Now a “preliminary schedule” has been created:

– 05/1980 Release of the complete device: electronics and housing parts

On 8 February 1980, chief designer Peter Vockenhuber signed the project description for the last time. Eumig had closed the business year 1979 shortly before with a minus of 678 million Austrian schillings. On 15 May 1980 the first Eumig factory in Bad Deutsch Altenburg was closed. On 28 May 1980 engineer Karl Vockenhuber and Dr Raimund Hauser resigned as owners and managing directors of Eumig. Their ownership shares were taken over by the state-owned Österreichische Länderbank. Karl Vockenhuber, the father of the Swiss chief designer, left his office on the tenth floor of the Eumig skyscraper for the last time on this day and walked down all ten floors.