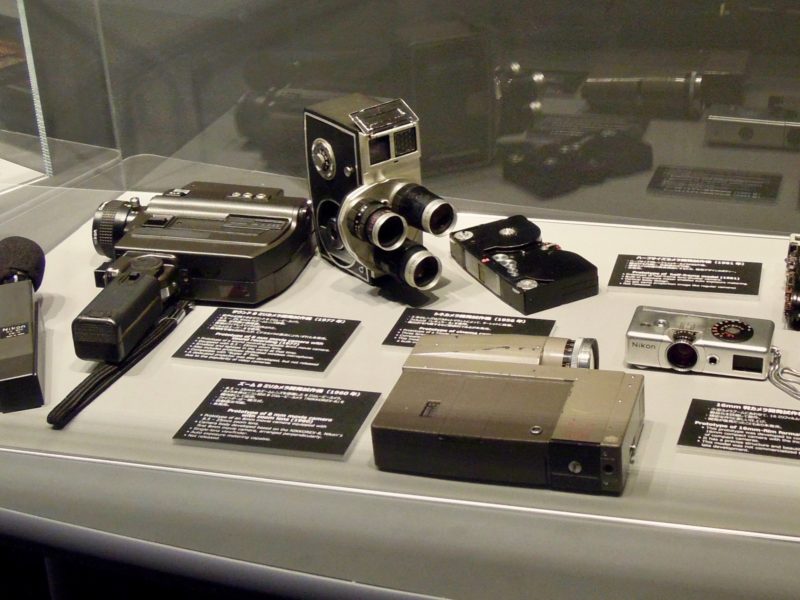 They will never be able to do what they were built for. And they’re no good to us because they’ll never be available. These prototypes just lie around – behind glass – and remind us of other times. And still we want to know everything about them, of course. About models of the 8mm age that were never manufactured, like the Nikon’s.

First of all, remember the address: 〒108-6290 Tokyo, Minato City, Konan, 2 Chome−15−3 品川インターシティC棟 ２F, because here, in the Nikon Museum, you will find three small format film cameras that you have never seen before. Let’s start with the youngest. It’s the prototype of a slim sound film camera for Super-8 sound cartridges and dates from 1977. In terms of design, the model is similar to a Fujica ZXM 300, except that it only ate Single-8 sound cassettes.

The model without name has a Cine-Nikkor 8.5-25mm lens with 3x zoom. Unfortunately, there is no indication of the lens speed. This Nikon was the smallest and lightest 8mm sound film camera in the world at that time, the museum people write. In view of the small Minolta XL-440 sound, which also appeared in 1977 and actually came into the camera stores, this is only partly believable.

Next to the camera in the showcase is the prototype of a wireless radio microphone to be plugged in. Here you can even find a complete name: Hi U-C M1C EM-11 is written on the plastic box, which houses an extendable microphone. The sign in the display case tells us that Nikon had also planned to install a sound film projector. But due to the dawning video age, this was never built.

Another prototype is from 1960, a bad lump that contains the housing of the compact Nikkorex-8. The Double-8 camera is said to have been intended as a successor of Nikon’s first movie camera. Instead of a fixed focal length, as with the Nikkorex, a zoom lens 8.5-25mm is now built in. Automatic exposure metering and a reflex viewfinder through the lens are also available. It remains a secret whether this adventurous construction was really close to being ready for mass production.

Next to it there is a prototype from 1956, a Double-8 camera with integrated light meter and a turret with three lenses. The Nikon Museum speaks of an “ambitious design”. This probably refers to the reversible metal cassette shown in the display case. It contains the Double 8 spools, which have to be turned after 7.5 meters of film run in order to expose the second half of the material perforated on both sides.

What does this brief glance into the showcase tell us? For example that in 1960 and 1977 the same focal length was used for the zoom. Unless a label is mistaken. I guess we’ll never know what these Nikon’s were really capable of…